(AV17) gallery, continuing the tradition of presenting contemporary sculpture in unconventional city spaces, is organizing a six-month project starting the month of July, during which contemporary sculptures and installations will be exhibited on the facade of the Vilnius Town Hall. This is a collaboratory project between the (AV17) gallery and the Vilnius Town Hall, each month a new piece will be presented by six contemporary Lithuanian artists: Algis Kasparavičius, Rafal Piesliak, Rimantas Milkintas, Dainius Liškevičius, Donatas Jankauskas, Jurga Barilaitė.

The project’s main goal is to make art both in the city and in historical old town spaces more relevant. Artists are creating pieces designated for this project and reimagining various sculptural and contemporary art possibilities. The connection between contemporary shapes, themes, and Town Hall‘s classicism style encourages us to regard historical Vilnius oldtown architecture from a different perspective and realize it as a dynamic part of the modern world.

Jurga Barilaitė is an interdisciplinary artist who often takes part in her performative works in which she analyzes various human sensations. The sound installation Laughter is made of the recorded artist’s laughter emanating from the speakers built into birds’ nests and forms different compositions. In this way, the author analyzes the culture of laughter, its origin in cult and ritual spaces, and its continued importance in society. From a psychological and physiological point of view, laughter is inseparable from human instincts, and the ability to laugh together in moments of joy and pain is characterizing a human community. Therefore, the work displayed on the facade of the Vilnius Town Hall emphasizes the importance of this building as a meeting place for citizens. The screeching sound resembles the voices of people and birds emanating from the very bowels of the city. Jurga Barilaitė’s work Laughter creates a sense of togetherness, infects and involves the viewer in purifying, liberating laughter.

No matter how much the sculptor Donatas Jankauskas-Duonis tries to be asocial in his work, he often employs the imagery of a monkey to speak with humor about the multi-layered cultural and social aspects. In his work Porker and Hempen Man, the author uses popular characters from Lithuanian ethnography from the festival of Mardi Gras, which convey the cyclical nature of the year’s work and results. The struggle between these characters, which is usually won by Hempen Man, is associated with the hope that after a dark winter, a fertile spring will soon follow, leading to a prosperous year. The display of these works in the forecourt of the Town Hall only further emphasises the importance of the wealth created by favourable deeds, not only in an individual sense, but also in a societal sense. However, in the face of various hardships of the present day, the disruption of the normal flow of life, the outcome of the struggle of these characters remains uncertain, while our future is becoming increasingly more unpredictable. In the context of the last few years, Porker and Hempen Man by Mr. Jankauskas encourages us to rethink the impact of the changing circumstances and to reassess what kind of prosperity we can create today.

In his work What if? / Situation / Parallels Dainius Liškevičius analyses topics related to security and diplomatic recognition, which are especially important now when tensions are felt due to the war in Ukraine. The artist’s ready-made work, through one personal experience of the author, draws parallels between important events for the country 20 years ago and now. It is a reference to the 2002 meeting with the then US President G. W. Bush, which took place in the Vilnius Town Hall after the NATO summit in Prague, where Lithuania was invited to become a member country. The artist raises questions: “what if what is happening in Ukraine was already happening in our country?” Is it possible that this could happen? Or are we already fighting the Third World War with Russia?!” Responding to a specific place and the collision of collective and personal memory, our situation in the context of the war, the author reminds us of these events and encourages us to rethink our political and diplomatic place in the world. More about the work and the artist

Sculptural objects and installations by Rimantas Milkintas can be recognized by a combination of characteristic minimalist aesthetics and the kinetic plasticity they possess. With FrontON, the artist analyses the eternality of architecture. The triangular pediment motif is used to create the composition of the sculpture, echoing the neoclassical architecture of the classical period, as well as the neoclassical architecture of the Town Hall. The sculpture itself is made of HEB steel beams, which are the strongest element of the architectural structure, able to withstand heavy loads and ensure the reliability of the building’s frame. The sculptor uses historical form and contemporary materials to convey longevity and continuity. However, Rimantas Milkintas only reinforces his structure at the points of support, thus creating an impression of fragility and encouraging a rethinking of the vulnerability of architecture, and of culture as well. About the artist

Rafal Piesliak is well known for his conceptual spatial installations and sculptures, in which the emphasis falls on the relationship between humans and their environment, as well as the development of new experiences. On the façade of Vilnius Town Hall, the sculptor presents the work Rostrums. As objects, they are commonly used to announce information, and decrees and are the most often associated with public authority. The work reflects both the historical significance of the Town Hall and the position of power it gives to the individual. Anyone standing behind the lectern gains an advantage over others listening to him or her. The two lecterns presented at the façade of the Town Hall not only allow finding oneself in a superior position and being heard but also encourage a conversation between different, sometimes disagreeing opinions, while allowing them to coexist. Rafal Piesliak’s work performatively engages the viewer in his creative experiment, thus expanding the possibilities of the work. About the artist

Nihil Novi (Nothing New) by Algis Kasparavičius is the first piece presented in Town Hall in July. The artist is well known for his conceptual sculptures which manipulate recognizable images while the center of his art is the investigation of a person‘s inner world and its’ surroundings. Algis Kasparavičius while applying easily recognizable shapes in his work with irony emphasizes various public opinions towards actualities and issues that many have to face. About the artist

Donatas Jankauskas-Duonis‘ Porker And Hempen Man is exhibited on the façade of Vilnius Town Hall from the 4th of November till the 30th of November.

Each exposition includes a discussion with the artist. During this, the attendants will be able to get acquainted with a broader range of artists’ undertakings and pose questions. The future session with Jurga Barilaitė will be held on the 13th of November.

The project is partly supported by the Lithuanian Council for Culture and Vilnius City municipality. 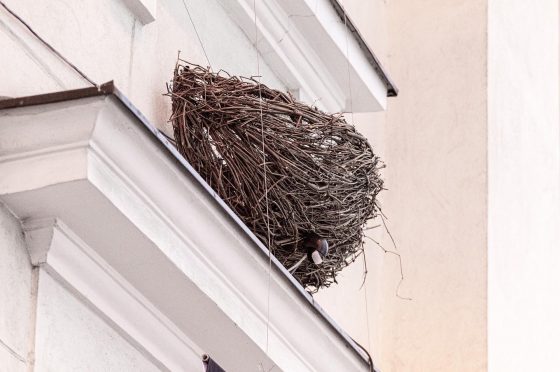 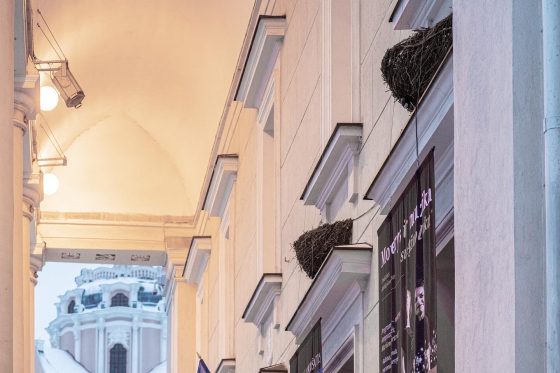 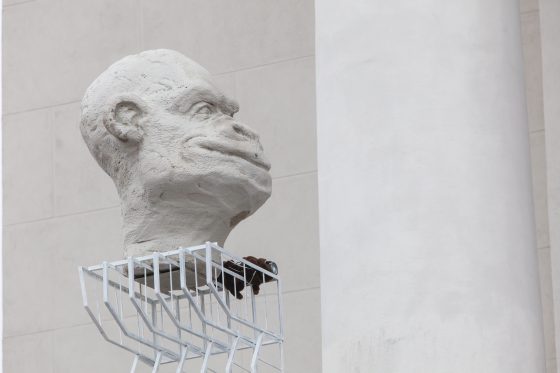 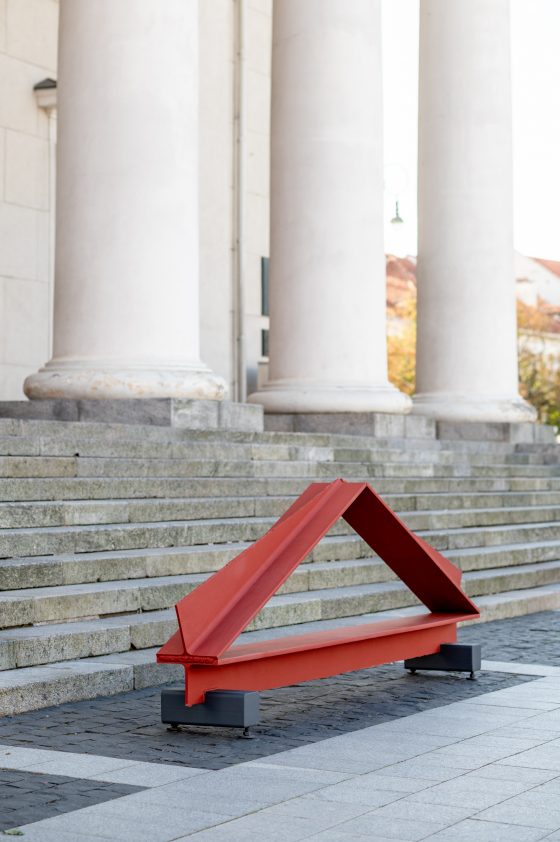 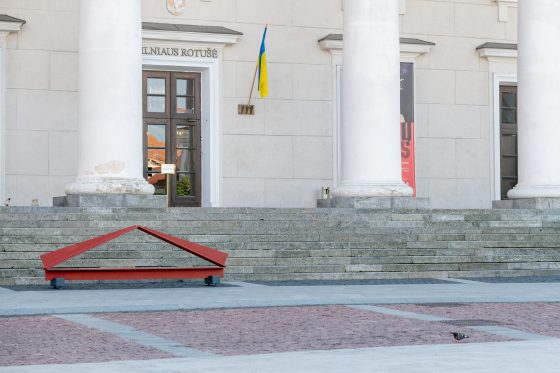 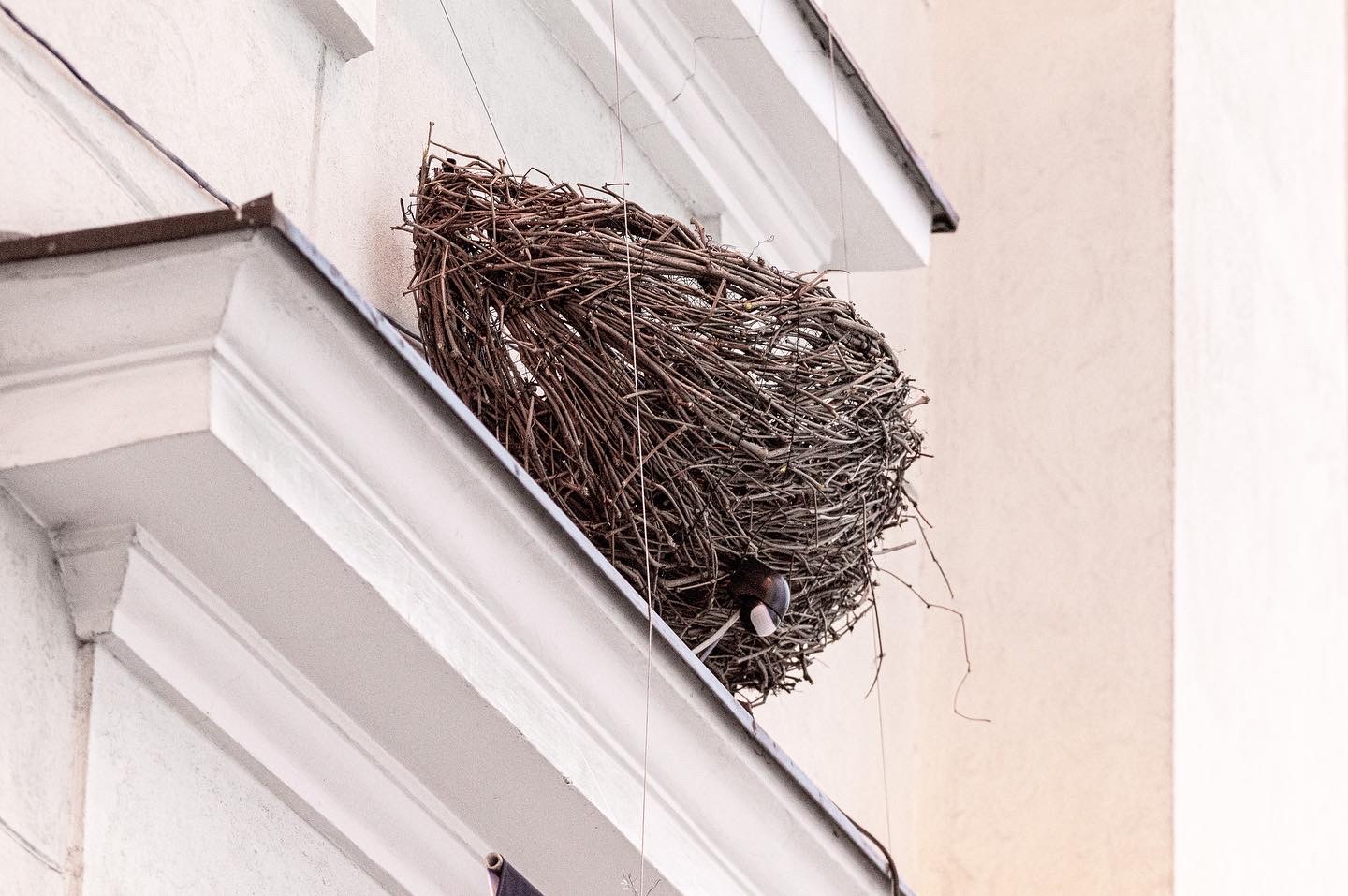 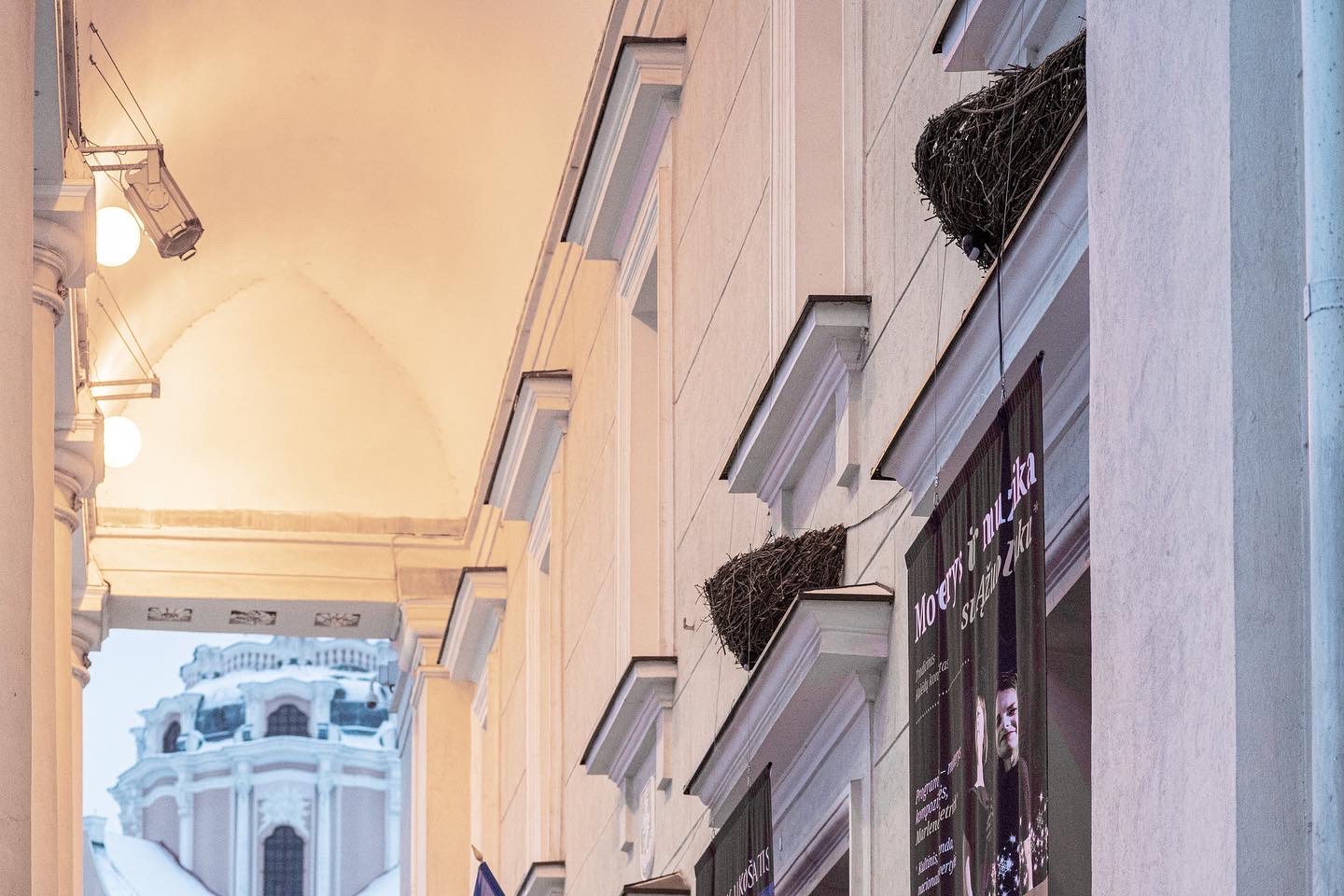 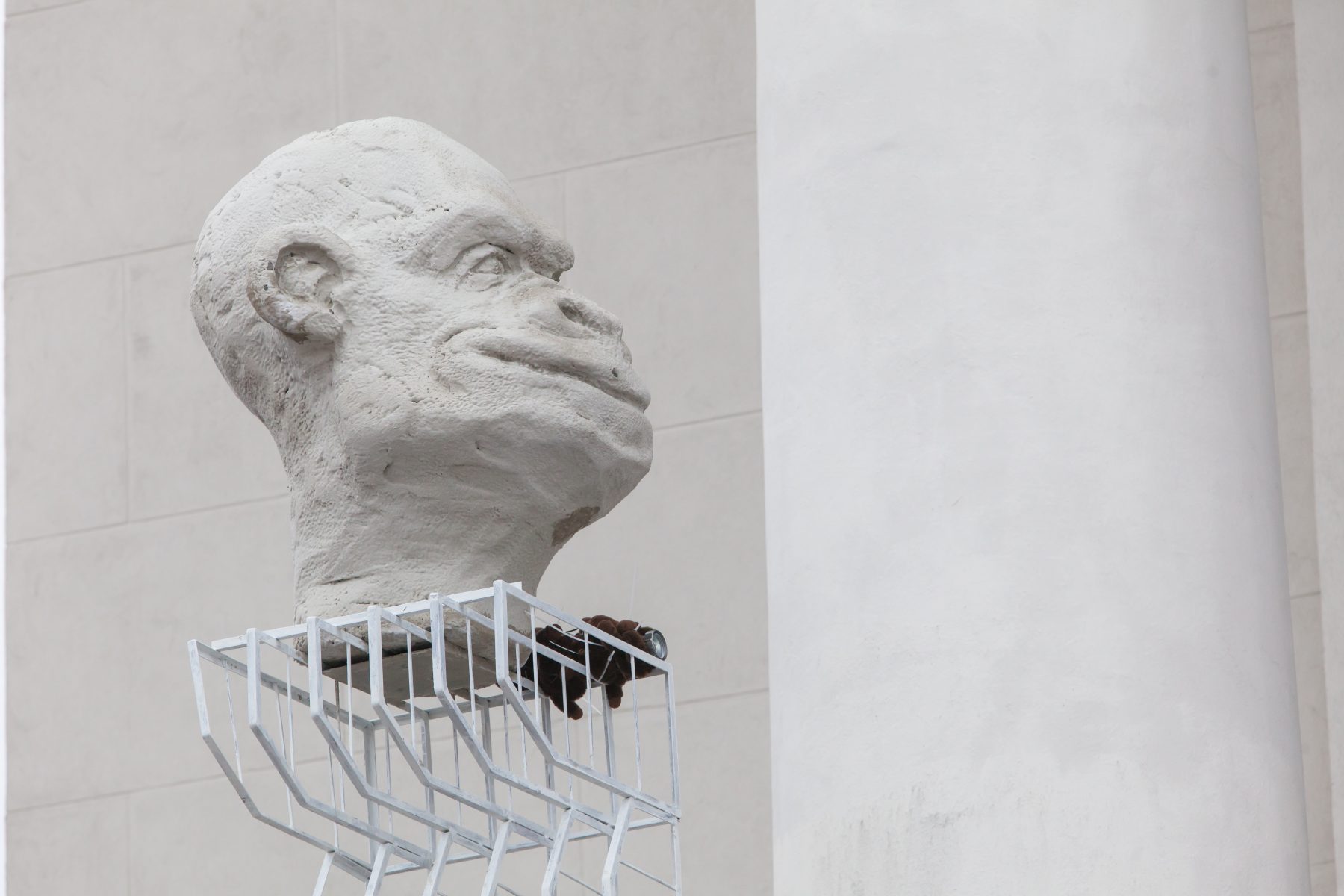 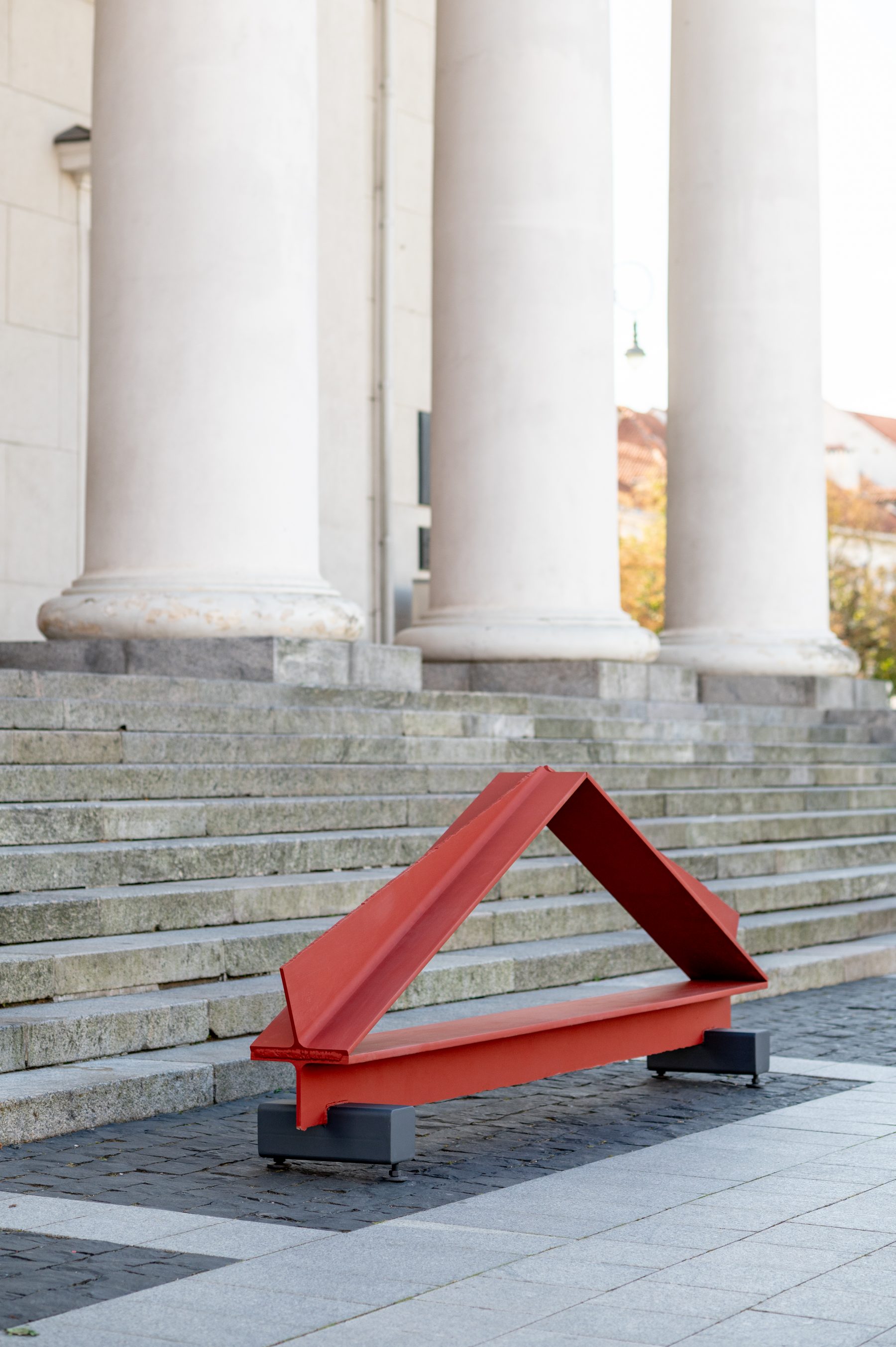 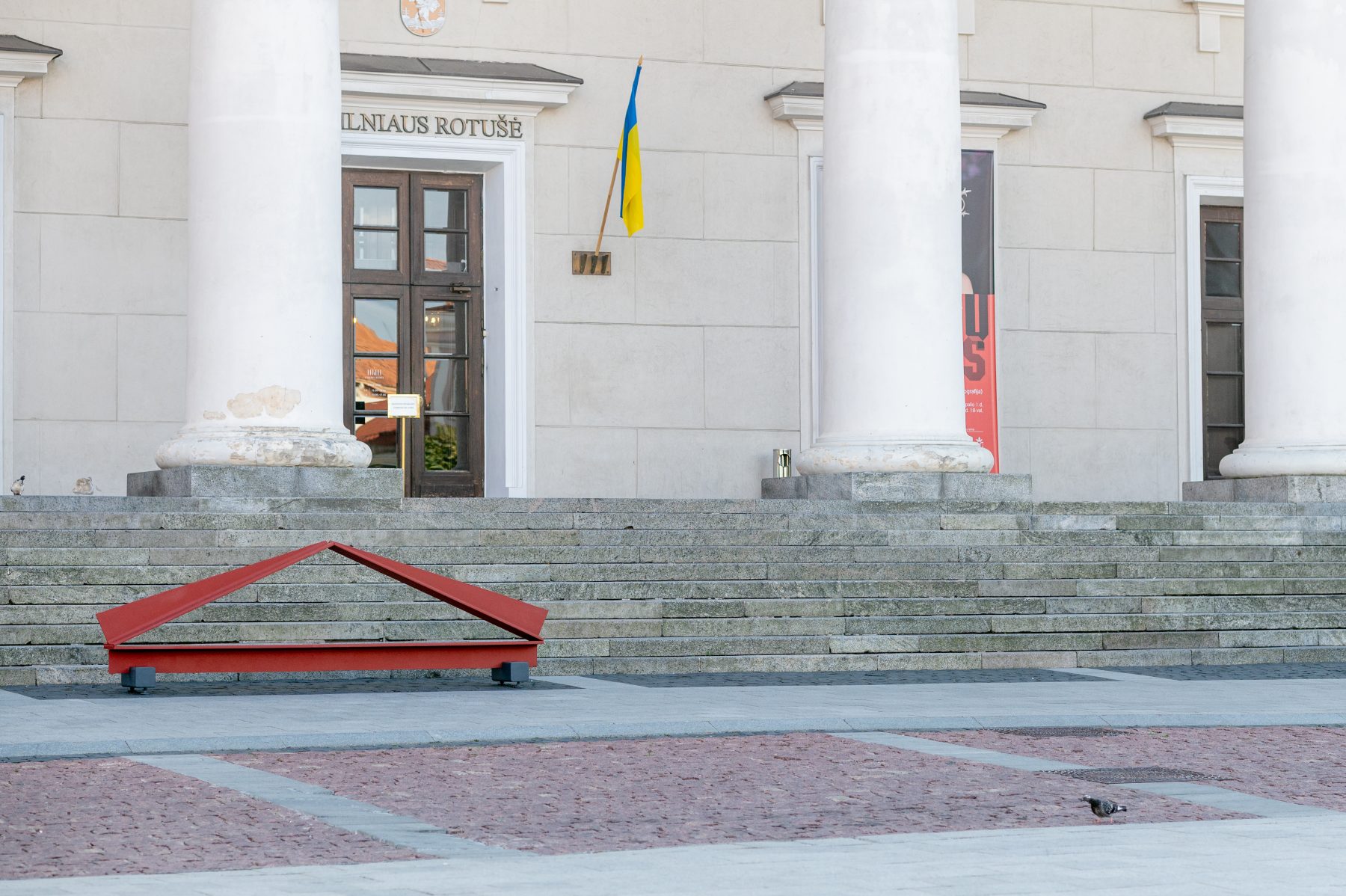